The Origin of Leather Belt

The leather belt was developed by the ethnic minorities in the north of ancient China in the long-term living practice. It is not only used for fastening robes and garments, but also for wearing and hanging some articles for production and daily use. 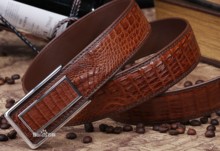 Tang and song dynasties, leather making useful inlaid with gold and jade jade belt and gold belt, belt by grade compose with silver or gold, jade, Angle and so on, the history of liao, instrument WeiZhi used to record the liao dynasty officials, civilian must wear "towel, calculate bags, knife" and other five kinds of objects, attache must wear "sabre, terrazzo, syringes, flint bag" seven items, such as if there is no leather belt, is can't carry so many things, so the belt became people an indispensable part in life.