The History of Leather

Leather tanning is without a doubt one of the oldest human activities. In the beginning, skins obtained from hunting and livestock breeding could be used for clothing or tents, but they became stiff at low temperatures, while they rotted with heat. It was probably then that attempts were made to render them more flexible and stronger by rubbing in animal fats, the first rudimental tanning process is mentioned in Assyrian texts and in Homers Iliad. 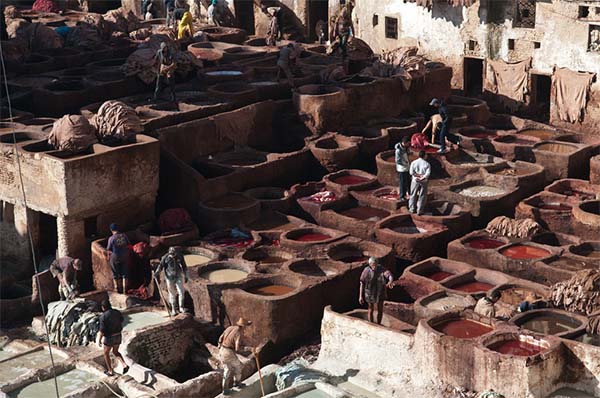 Another process was smoking, which almost certainly started by accident, and which later became formaldehyde tanning, as this substance is found in the vapors produced by burning green leaves and branches. It was soon discovered that the rotting process could also be stopped by drying, carried out by exposure to the sun or by the dehydrating action of salt. Vegetable tanning was also known in very ancient times although it is not clear how the tanning action of the tannin contained in the bark of some plants (especially oak) was discovered. Another method known since the earliest times is tanning, based on the use of alum, a mineral which is fairly widespread in nature, particularly in volcanic areas.

These methods, which gradually became more refined and efficient, allowed skins to be used in the ancient world and continued to do so for century after century up to the present day. That the use of these techniques was widespread is witnessed by numerous written documents and paintings as well as archaeological finds. In Mesopotamia between the fifth and the third millennium B.C., for example, the Sumerians used skins for long dresses and diadems for ladies. The Assyrians used leather for footwear but also for liquid containers and as inflated floats for rafts. The ancient Indian civilization first processed the type of leather known as the "Morocco" today.

The Egyptians also achieved considerable skill in processing leather, which they used for clothing (even for gloves), tools, arms or simply for ornament. The historian, Strabo, tells of an interesting use developed by Phoenicians who made water pipes from it. During Roman times, leather was widely used in all the provinces of the empire, and more efficient tanning techniques were introduced where they had not been developed locally.

The Romans used leather both for footwear and clothing and for making shields and harnesses. A tannery was uncovered amid the ruins of Pompei and the same equipment of the kind still in use for centuries thereafter was found in it.

Skipping forward to the 8th century of Spain (then under the dominion of the Moors) we have the development of the production of "Cordovan", thanks to important progress in tanning, a type of leather famous throughout Europe for centuries. That skill in leather tanning was not a prerogative of the western world as recounted by Marco Polo. In his "Travels" he tells us that the Mongols used leather flasks, covers, masks, and caps, decorated artistically, and it was him who coined the expression "Russia Leather" to indicate a type with a characteristic fragrance.

A considerable improvement in processing techniques occurred in the 12th century with the result being that between then and the last century, there were no substantial changes to tanning systems. Even oil tanning was used to produce protective garments while towing was widespread although the results were not always satisfactory. Often, finishing operations were carried out to improve the malleability of the leather and improve its appearance, especially by dying. The products, though essentially practical, also met decorative requirements.

In the fourteenth century, for instance, leather was being used in combination with wood in chairs, armchairs, and settles with craftsmanship that reached the levels of an art-form. This was also the case later on with tapestries (especially in Venice in the fifteenth and sixteenth centuries) with chests and cases, and of course, with book bindings, perhaps the most lasting and refined use of the material. Going back to tanning techniques, it is more or less in the Middle Ages that the depilating action of quick lime was discovered, a technique which is still valid and normally used today.

A radical shake-up was provided in the middle of the last century with the discovery of the tanning power of chrome salts which led to a drastic improvement in production and was applied in practice in industrial production towards the end of the century. Another revolutionary element was the substitution of the tanning pit with the rotating drum, along with the discovery of new types of tannins.

As a result of all these innovations, the time required for tanning was shortened incredibly from eight months to a year, to a period of a few days today. But let us take a step back again to have a look at the system and tools that were once used to work leather. We immediately discover that from Palaeolithic times, almost to the present day, the processes and tools remained almost unchanged, gaining only in efficiency and comfort.

Similar tools for fleshing, scraping, shaving, perching, and trimming is found in practically every epoch known to us.

This is a further demonstration of the fact that leather tanning has gone hand in hand with the history of mankind, maintaining those features of "craftsmanship" which even today with increasing automation are an essential part of the personal sensibility and solid experience of those carry it on.