How to distinguish the hand-stitched and machine-sewn?

There are lots of people don’t know how to distinguish the hand-stitched and machine-sewn. J.D. Leather arranged two methods. Hope it is useful to you. 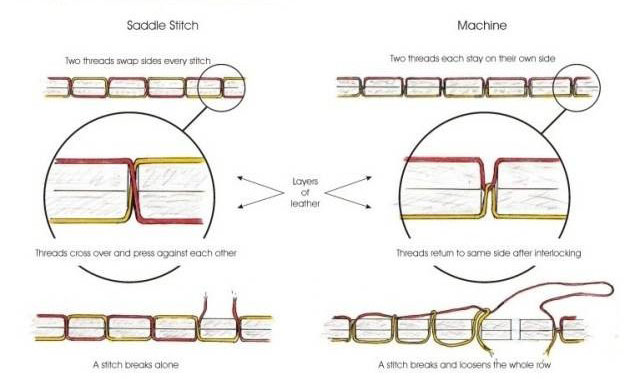 Hand-stitched is not the same. It is one thread with two needles. There is no different about the thickness because it depends on the pulling force when stitching. In this way, it is easy to distinguish, when we see the same upper thread and lower thread, mostly hand-stitched.

The sewing machine has different speeds when it is working. It is always fast when stitching the straight lines, and it will become a little slow when turning a corner. Skilled workers may be able to handle the corner stitching, but the principle doesn’t change. So it will make the upper thread has a slight different: fast speed makes the distance shorter and lower speed makes the distance longer. So if we are enough careful, the different can be found when we compare the distance between the straight lines and corner lines.

Hand-stitched will punch firstly, the distance between holes are the same. So the inconformity will not happen.

If you have the better methods, welcome to leave message to discuss.